It may be hard to believe, but it has been four long years since the London 2012 Olympic Games and in a matter of days the Rio 2016 games will be kicking off. If the statue of Christ the Redeemer was wearing a smart watch, it would be reading Sport O’Clock!

Over the course of the next few weeks, Rio will witness 28 different sports and 306 individual medal ceremonies, quite a few more than the first real Olympic Games of the modern era, which was held in Greece in 1896 with 43 individual events over 11 different sports.

For a lot of people the media overdose of 24 hour, wall to wall sport will be too much. However I say embrace it, embrace it all, and open your eyes to a few things that you may not really be aware even exists. If you watch most of your sport on the main television channels or media outlets, you could be forgiven into believing that there are only about five sports on the whole planet, however the next few weeks brings the casual observer a window on to the rest of the sporting world. The Olympics bring people together, nations and continents together and sports together united under the quest to go Faster, Higher and Stronger.

The Olympic ideal of Faster Higher Stronger is a motto that the most creative of corporate identity design professionals would take a while to get to, yet it was Henri Didon a Dominican Priest who first coined the phrase in 1881 and used by Pierre De Coubertin at the creation of the Olympic board in 1894. The Olympic flag is also a work of simple brand identity design, the five coloured rings representing the five inhabited continents of the world linking together. This again was the work of Mr De Coubertin.

In the 120 years since the first modern day Olympic Games, the branding of the evergreen motto and the five rings of the continents hold true and remain the strongest brand imaginable although much has changed since 1896…

In Rio this year there will be a grand total of 86 events involving water, whether its being dived into, canoed in, rowed in, balls thrown in, danced in, in perfect synchronicity i might add, sailed across and even swam through, not including the triathlon.

Of course the Olympic games has changed and altered over the years with sports being removed and a few different sports being added to the roster, however the power of the Olympics corporate identity outlives them all, remaining the same throughout, showing the true strength of a brand. There are a number of events that have featured in the Olympic games that I personally would love to see back at Rio.

Firstly, The Tug of War. Eternally popular at village fetes across the land, and it’s easy to see why. This is surely the most simplistic demonstration of strength, style and team work in the world of sports today. Not only that but you don’t need a lot of equipment… one rope and something to draw a line on the ground so it has to be cheaper for the British Olympic Committee to fund than say…. the rowing? If you are struggling you could always use the rope to climb up later and train for another event.

The Rope Climb. When this was an actual Olympic event, points were awarded not only for speed up the rope but also for style. I remember desperately clambering up a rope in PE with a games teacher yelling at me from the ground. To be honest I don’t think I really would have got a very high score for speed and I am afraid it would have been zero points for style.

Solo Synchronised Swimming, yes, take a little moment to consider this for a second…, solo synchronised swimming! One person in the water swimming in complete synchronisation with themselves.

And as for my absolute favourite… The Distance Plunge. This particular event only made it to a single games in 1904. The rules of the sport were that the participants dive into the pool and coast underwater without moving for 60 seconds. When the one minute whistle blows or the athletes had surfaced, the distances that each competitor had drifted were measured, the competitor that drifted the furthest was the winner. 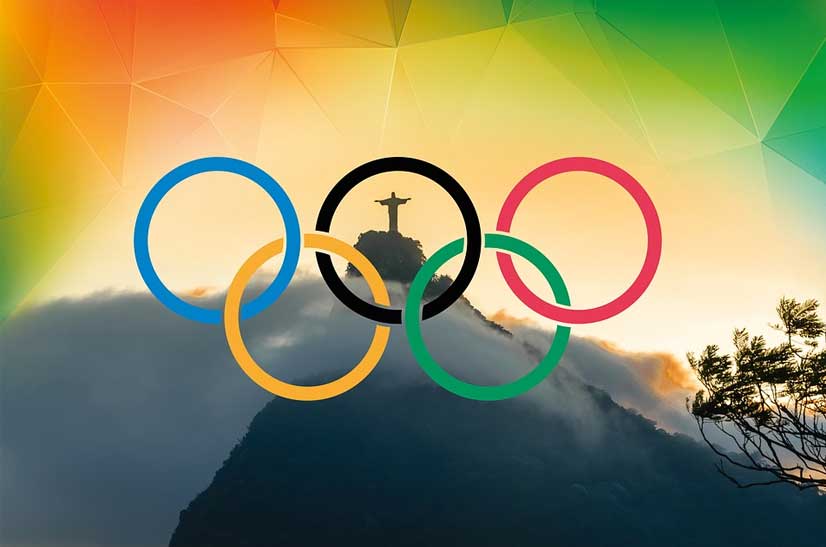 As for the winner of the Rio 2016 Olympic games, as in London 2012, the biggest of all will be the Olympics itself. With its gold medal deserving branding that celebrates physical culture and art, promotes international understanding (much needed in our current Brexit year) and inspires people to reach higher, faster and stronger. Branding that unites all nations and calls upon us all to link as one to celebrate something greater than the sum of its parts.

The Olympic coverage will be huge and so will the competition from the athletes under the biggest and strongest brand of them all, the five Olympic Rings. Whatever you find becoming your new favourite sport, the Show Jumping, the Javelin the Handball or the Water Polo, enjoy…
but just think how much better these games could be with a Tug Of War tournament.