Overall Business of the Year!

You are here:
Web 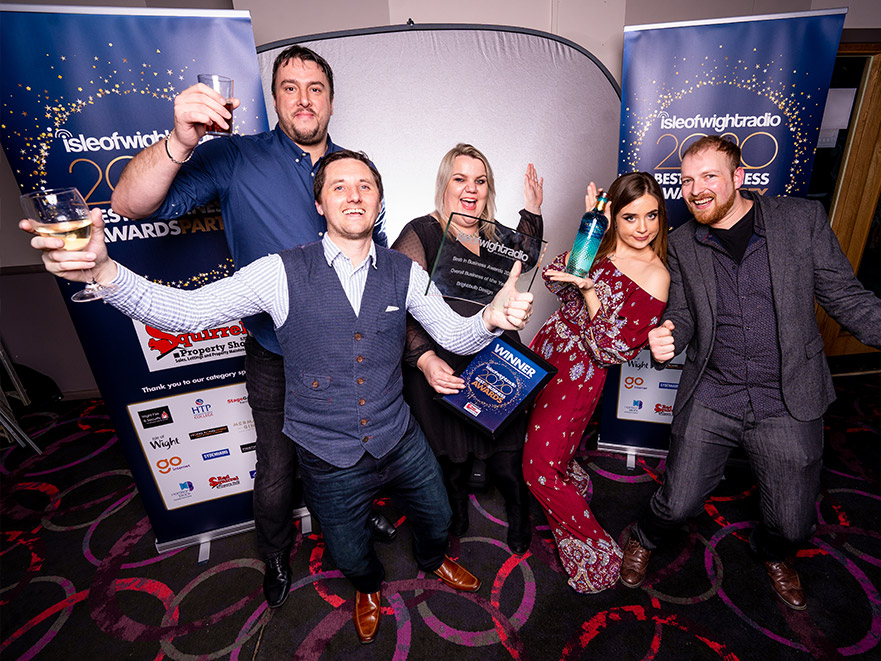 This is the first time we have attended the Isle of Wight Radio Best in Business Awards and well what can we say, it was a night to remember for the Brightbulb team. We started the evening entering a well dressed venue of Lower Hyde in Shanklin, which was much bigger than we had anticipated. The IW Radio team had done a great job of making the place look fantastic. We were welcomed by drinks and saw a huge buffet ready for the celebrations.

We chatted to a few local businesses including Medtec, Sugar and Spice Lingerie and Visit Isle of Wight before we found our table and started chatting amongst ourselves. Paul Topping took to the mic to introduce the night. The table wine started flowing and we enjoyed a varied feast of a buffet.

Then to the awards. The first award went to Go Internet for New Business of the Year, followed by Briddlesford Farm, Hose Rhodes Dickson and Island Photo Centre. Then to our award category, the customer excellence award. We were so pleased to have been nominated, the nerves started as they always do at this paticular point in an awards ceremony, awaiting to hear the outcome. The award went to the Jewellery Cabin. The excitement faded and we looked forward to seeing who else would win an award. The drinks were flowing and we saw our friends at Medtec take an award home alongside The Cottage and Tapnell Farm. The award kept coming and then to the climax of the evening. The overall Best in Business, Business of the Year Award.

Paul started to talk about a family business starting in 2014, we were not really taking it in but me and Fi both thought, thats when we started. Then Paul said Matt, Fi and Alan. Adam looked over to us and said, thats you guys. Me and Fi looked at each other in shock of what was happening. A friend of ours later said that evening he was watching our faces and we should have seen how shocked we were. It truly was an amazing moment to be chosen out of the hundreds of businesses as the overall business of he year, remarkable.

Paul announce Brightbulb Design and we took to the stage in utter shock. We were so pleased that the teams hard work had been recognised. The night continued with a party, hosted by Isle of Wight Festival favourites – Electro Love.

“The volume of nominations was incredible. Businesses across such a wide range of sectors have been recognised by their customers and staff. Isle of Wight Radio is celebrating 30 years on air this year and what a great event to kick the celebrations off.”

What a night, there was much celebrating and the night was one to remember for the Brightbulb team.